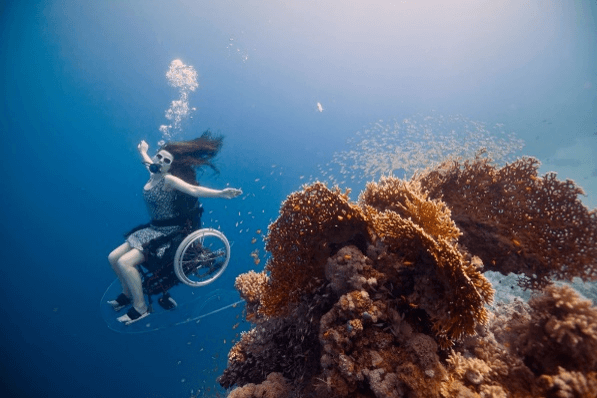 When Austin began using a wheelchair, she (like Gosling) described feeling like an invisibility cloak had descended upon her.1 She knew that the people who looked away were acting in accordance to fixed preconceptions of assistive technology: that it signified limitations, constraints, and a negative sense of being “other.” Austin strived to challenge each of these notions by highlighting how her wheelchair both extends her freedom and provides her a new joy of motion.

Austin outfitted her wheelchair to drive underwater, highlighting a parallel she observed between personal mobility devices and scuba gear. Both tools enable experiencing the world in a fundamentally different way, yet the associations attached to scuba gear are ones of “excitement and adventure, completely different to people's responses to the wheelchair.”1 With her performance, Austin calls upon those who previously looked away and shows them her new experience of the world - entrancing them into witnessing the value, beauty, and joy of difference.

Watching this piece, I was struck by how Austin leveraged the idea that disability is performed (similar to how other axes of identity including gender, sexuality, and race are performed).2 I am wary of likening a consciously constructed display to the overarching idea of performing disability, which can be unconscious, more pervasive, and less spectacular. Creating the Spectacle! is an eye-catching example, but should not overwhelm attending to disability’s “performance of everyday life.”2

Watch Austin's TED Talk on Creating the Spectacle! and explore her personal webpage at wearefreewheeling.org.uk/sue-austin-home.